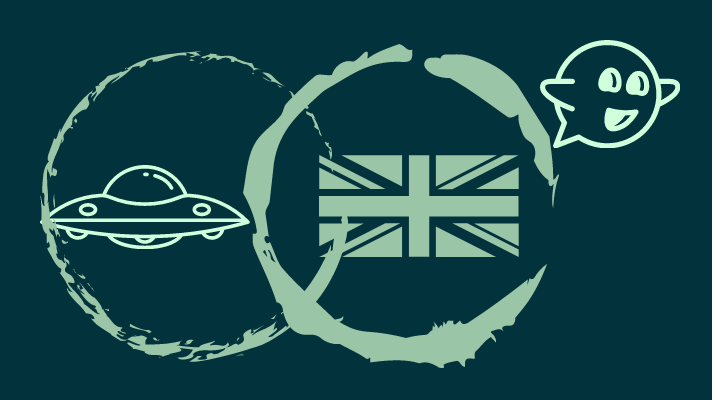 Have you ever experienced paranormal phenomena? What was it?

Do you believe in UFO?

What other paranormal events do you know?

Complete the sentences with the correct words.

a flock of birds

Listen. Does Nina think the lights were from a UFO?

Why does Adam think it was a UFO?

We believe in ghosts

If you believe the dead can return to haunt the living, you’re not alone. According to one poll, 45% of Americans believe in ghosts and 28% claim to actually have seen a ghost. They show up in our movies, “I see dead people” books, and Bone Thugs-N-Harmony music videos. As far back as we can trace human life, there’s evidence that almost every culture has expressed curiosity about what comes after. Many people believe in them, but is there actually any proof that ghosts exist?

There is no proof

I went to Buffalo, New York, to talk to Joe Nickell, a paranormal investigator who’s been trying to answer that question for almost 50 years. I’m the world’s only full-time, salaried, professional, science-based paranormal investigator. I’m looking to explain a case, not debunk it, not promote it. Explain it. Nickell is a true renaissance man, drawing from a wide variety of disciplines for his cases. I mean, at one time or another I’ve used linguistic analysis, I’ve used blood pattern analysis, psychological insights. Nearly anything could be used if it would illuminate a particular case. So in the hundreds of cases in his half-century of investigation, has he ever found anything that would make him believe in ghosts? Not only have I never found a single case that I thought was proof of a ghost, neither has science. Not a single ghost or haunting has been authenticated by science.

Part of what makes it difficult to investigate is all the different ways people have defined “ghosts.” Books flying off a shelf? Orbs in photos? Mysterious footsteps in the attic? Patrick Swayze seductively helping you throw a vase? Definitely ghost. All of the would-be evidence that ghosts exist consists of ambiguous photographs, videos. “The next day, his HDTV literally begins rocking violently from side to side all by itself”. And first hand accounts. “Even if it’s during the day, there’s this eerie feeling that you get that there’s someone there”. Which, while fun and spooky, are not exactly scientific proof. Ghost hunters often use gadgets such as EMF meters, a tool that measure electromagnetic fields, which ghosts can supposably manipulate. But nobody’s been able to explain exactly what the link is, and most scientists are pretty skeptical of this stuff.

Can you feel the presence?

So there might not be any empirical, scientific evidence that shows that ghosts exist, but that doesn’t actually mean that you’re crazy if you think you see one. One is infrasound, a sound that falls below the audible 20Hz frequency. Infrasound can be produced by many things, including or certain machinery like engines or fans. Researchers have hypothesized that exposure to infrasound can induce feeling of depression, chills, and the sense that somebody’s presence is near you. The sound can even cause visual hallucinations. At the frequency of 18Hz, it resonates with the structure of the human eyeball. And if you have a sound that resonates with something material, it will make the material vibrate at that frequency. And when that happens to you, your eye begins to see things that are in fact not there. Swiss scientists have also been able to simulate a ghost in a lab. They made a robot that mimics the movement of the subject’s hands with a mechanical arm that touches your back, but with a slight delay. When you delay the movement, it creates an unmistakable sensation for subjects that there’s a ghostly presence in the room. This time it really felt like I was playing with somebody, something. So it wasn’t myself that was poking me in the back, but it was as if I was playing with an animal, a monkey, that was poking me in the back or something like that. While most ghost sightings can’t be written off as a robot poking your back, this experiment does highlight how manipulating certain parts of your brain can produce what researcher Olaf Blanke calls misperceived self-representation, which can easily be misconstrued as a ghostly presence.

Sometimes even just a person’s state of consciousness can make them feel or see presences. We can actually have people see ghosts, and those tend to be waking dreams that occur in the twilight between being fully asleep and fully awake. These kind of waking dreams can also be called sleep paralysis, which about 8% of people experience at some point in their lifetime. You feel like you’re awake, but you’re unable to move your body, and it’s often accompanied by terrifying visuals like shadows, people, or even monsters, which, if you didn’t know what was happening, would be easy to confuse for having seen a ghost.

It helps us to heal

Another possible explanation for ghostly sightings is grief. One study found that up to 60% of people that lose a spouse claim to see or hear their dead loved ones. In his book about hallucinations, neurologist Oliver Sacks said that seeing the face of a deceased loved one can actually help you cope with your grief. This sort of hallucination is not frightening; it’s often very comforting. It seems to be part of the mourning process. A sudden hole has been left in one’s life, and this helps it to heal over. There is no question that most of the paranormal promotes something very positive. There are a few exceptions, but all have to do with our hopes and our fears. We’re hopeful that ghosts exist because then we don’t really die. Our loved ones are not gone from us; they are real and alive. I remember when my grandmother died and how much I did not want that to be the case. But the ghost idea, the idea that we just get up out of our bodies and continue on, is powerful. Because who doesn’t have an instance in which he or she would say, I just wish I could’ve told my mother this one thing. Or I wish my father knew I wasn’t really mad at him that time. So ghosts may not actually exist, but that doesn’t mean that you might not see one.

A haunted house
A haunted house is a house or other building often seen as being inhabited by ghosts who may have been former residents of the house.

The lights started to dim
To dim is to make or become less bright or clear, become darker

Listening skills can be improved with watching videos with subtitles for any level!